We get a lot of questions online about our tuna spreads, the most common being how far back do you let your lures out and how fast do you troll. To put it simply, if it looks like a happy spread, it’ll most likely do the trick.

Today, we are going to take you through our highly efficient bait ball tuna spread that Capt. Mike uses just about every time he goes tuna fishing.

“I use four, 40-inch bulb squid spread bars with 6-inch squids on the inside and outside riggers, a bird bar down the center rigger and two harness jigs on the flatline clips,” Capt. Mike said. Step One: The first lure that Capt. Mike lets out is the bird bar spreader, which goes right down the center line where it is out of everyone’s way. Mike advises to send it as far out as you are willing to deal with.

“I like the splash bar down the center for a couple of reasons,” Capt. Mike said. “I can see it and see where it splashes so I know where my lure is and in a hot zone, other’s know where I am, too.”

Step Two: The second lure that Capt. Mike deploys is the spreader bars on the outriggers.

“Put the first 40-inch flexi bar on the outer rigger and the second on the inner rigger on the starboard side,” Capt. Mike said.

Repeat step two on the port side while favoring a ride side turn.

Step Three: Deploy your flatline clips, which, here, we are using the Hogy Harness Jig Lure.

“I prefer flatline clips to rubber bands,” Capt. Mike said. “But I will show you how to rig up with both.”

Starting with a flatline clip, you want to thread the flatline clip through the cleat so it is secure and then, if applicable, send the flatline clip out the scupper. Grab the running line, reach over and connect it to the flatline clip. This creates a low profile and you’ll need less line to get the lure in the proper position. Let the harness jig out so it is roughly 4-feet in front of the inside bar and about 4-feet inside in general.

“A lot of the times, they blow up on the bars but the flatline clip will go off,” Capt. Mike said. “This is very common.”

If you don’t have a flatline clip, you can use a rubber band. You want to calibrate it where you think you want the harness jig and then take the running line and the rubber band, fold it over the line to keep the angle low and, although some people clip it on the handle, Capt. Mike personally puts it on the reel seat for a much lower presentation.

Step Four: Make sure you have a happy spread.

On calm days, there really is no wrong way to run a spread. It’s OK to fish the lures a bit further back on a super calm day, but on a rough day, you’ll want them a bit closer to the boat. In terms of trolling speed, we suggest running at a speed so that the bars are dancing and bouncing on the surface, with a very natural presentation. They should be flexing and pulsing to look like a nervous school of bait.

Once you have the spread dialed in, you can start to mess with your angles and overall presentation.

Capt. Mike normally runs with a “W” formation with the inner, outer and flatline rigger placement representing a “W” (see diagram above).

“As long as they aren’t digging or tumbling or looking awkward in the water, you should be happy,” Capt. Mike said. Offshore lures are often referred to collectively as a spread. Like just about everything in life, there is more than one-way to skin the cat(fish). Here is a rundown of three classic spreads as I’ve learned from my years fishing south of the Martha’s Vineyard. 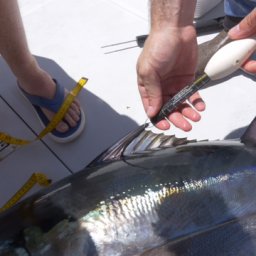 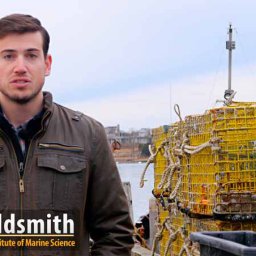 How To: Jigging Softbaits for Tuna on Sand Eels

Jigging Softbaits for Tuna ﻿ Heading towards the BC buoy, east of Chatham, Capt. Mike and the Salty Cape crew… How To: Catching Bluefin Tuna on Paddle Tails (Butterfish)

Catching Bluefin Tuna on Paddle Tails  ﻿ Capt. Mike Hogan and John Burns head out to the east side of… How To: Sight Casting Cruising Tuna with Paddle Tails

Sight Casting for Cruising Tuna ﻿ The Hogy Pro Tail Paddle Tail is the perfect half beak imitator, which is…