Captain Mike Hogan made it out on Wednesday with Capt. Cullen Lundholm from Cape Star Charters on his sweet new Conch 27 chasing the top water tuna feeds that where happening at the Dump:

“It was a tough day for casting with relatively few aggressive feeds. Blind casting was the name of the game. Anglers with stick baits were doing well. The trolling guys got fish but the bites were a little less frequent than previous few days, but still very decent. Rather than drift and blind cast, we trolled a 4 rod spread of olive and bone colored harness jigs on the spinning rods, ready to drop on fish on the fish finder. We picked up on 50” Bluefin in relatively short order doing that. Later while scouting a bit, we came across a school of milling tuna and got one on the new 3oz Pro Tail Paddle. The loop knot parted at the boat while trying to release it. I am NOT looking forward to watching the video! Although there were fish around, anglers in other locations on the radio reported fish in other places which is a nice change as it will spread the boats out. Race Point is one of Cape Cod’s most productive fishing spots. Learn how and when to fish the Race through videos, charts and tackle suggestions. Gear: How To Choose The Best Waders & Boots For Shore Fishing 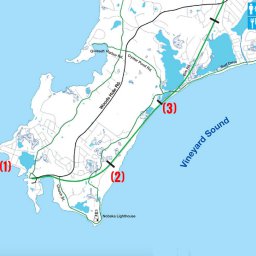