How To: Open Water Trolling with Swimming Plugs at the Hooter

Open Water Trolling with Swimming Plugs at the Hooter

Normally, the Hooter is an end-of-summer fishing spot, known for it’s wide range of species from striped bass to scup. But, with recent reports of bonito making their way into the well-known area, Capt. Mike Hogan and the Salty Cape crew decided to make a mid-summer run to the popular grounds.

The Hooter, which is a bit south of the eastern portion of Martha’s Vineyard, is home to a wide variety of species, including sea bass and bluefish, which the Salty crew were able to catch while trolling the 5-inch Hogy Charter Grade Slider on lead-core line.

“There’s a deep side to the rip and a shallow side to the rip,” Capt. Mike said as he let out all but one color of his lead-core line. “The Hooter is a cool spot because you never know what you’re going to catch.”

Using lead-core over mono or braid allows you to fish various depths of the water column depending on how much line you let out. For example, with striped bass schooled up on the bottom, you’d want to troll with more line at a slower pace. With bluefish scattered throughout the water column, you can get away with a shorter amount of line while trolling at a faster pace.

“What I like about this lip-less lure paired with leadcore line is that I can put that lure anywhere in the water column that I want to based on how much line I have,” Capt. Hogan said. “For example, if I go over the fish finder and mark a nice fish on the bottom, I can take the boat out of gear and these lures are going to sink down with the leadcore.” While fishing in deeper water, say on the deeper side of the rip at the Hooter, you’ll want to let out as much lead core as you can get away with. It’s absolutely worth the effort to mess around with the line length and the boat speed to figure out where you want your lure to swim in the water column, and what species you’re targeting!

Check out the full length video to see how Capt. Mike and the Salty Crew made out! 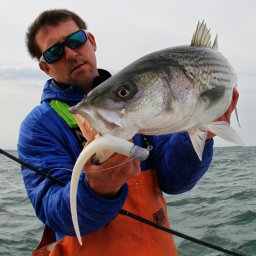 Video: How to Rig Midwater and Deepwater Soft Baits Rigging Methods for the Hogy Epoxy Jig Due to the versatility of Hogy Lures, many of our jigs can be… How To: Rigging the Hogy Dancing Diamond Jig

Rigging the Hogy Dancing Diamond Jig ﻿ It’s as simple as Capt. Mike puts it – when stripers are keyed…