Bottom fishing around the Cape, especially in Vineyard and Nantucket Sounds and Buzzards Bay can be quite productive. Targeting specific species is the norm. The most sought after as a food fish is the fluke or summer flounder. They are a predator unlike other members of the flounder family and will ambush any small baitfish that comes near them as they lie in wait camouflaged in the sand. Because of their aggressive nature, fishermen do well with small jigs or spoons bounced along the bottom but the most popular rigs include a baited hook (squid strips work well) with some sort of shiny spinner to attract the flukes attention. Fluke are usually fished from boats in areas with a sandy bottom but they can also be caught in relatively shallow water during the summer. Size regulations and bag limits change on a yearly basis so be sure to check the Massachusetts Department of Marine Fisheries website for the latest information.

The most prolific fish for those soaking bait are the ubiquitous scup or porgy. Most that you will catch (particularly from shore) will be below legal size to keep but the action can be so fast that a parent fishing with a child should not expect to fish him or herself – they will end up spending most of the time either rebaiting hooks or removing fish from lines! Almost any dock or jetty along the Sounds and Buzzards Bay where a baited hook can be lowered into 8 or more feet of water is close to a sure thing for scup. Although they are rather bony and difficult to clean, many enjoy their white flesh as table fare. The most basic fishing gear – a light rod rigged with a “scup rig” of a baited hook and a small weight – is all that’s needed. Frozen squid cut into tiny strips is the preferred bait.

Black sea bass are a migratory fish much prized for their delicate meat, which tastes almost like shellfish. This is due to their diet of small crabs and baitfish found in rocky areas. They show up in late May or early June and hang around until the fall. Sea bass are almost always found in relatively deep water, over 25 feet, so they are not a viable target for a shore angler. Boat fishermen use small jigs baited with pieces of squid or freshly caught baitfish from the shallows, bouncing the offerings around reefs or places with a mixed rock and sand bottom.

Tautog (called blackfish in southern New England) are another bottom fish that are popular with bait soakers. They also are a migratory fish with an open and closed season. They are found in depths of 12 to 50 feet around rock piles, jetties and rip-rap. This is because they eat crabs, barnacles and the like found in rocky places. These fish are strong fighters that must be wrestled up as soon as possible so they don’t find a crevice in the rocks to hide in and break you off. Special “tautog rigs” are available in local tackle shops that are made with heavier than normal hooks and weight holders. Green crabs are the preferred bait, which you can catch yourself or buy at local shops, especially in the spring when the fish first show up. Tautog meat makes an excellent chowder! 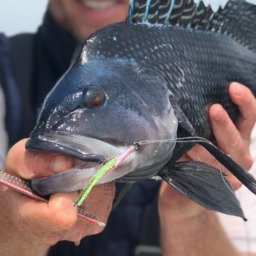