The 40z Hogy Tuna Rigged Epoxy Jig is a very large epoxy jig that is thru-wired and perfect for big game fishing. It comes with a super high-end, super strong and super sharp VMC Tropic Star 2/0 hook.
“This hook is plenty strong for any Bluefin tuna you would catch on this rig,” said Capt. Mike Hogan.
It is considered to be a hybrid of sorts because it can be used for just about any style of fishing from vertical jigging for striped bass and Bluefin tuna to casting to top water schools of Bonito and Albies. It’s very versatile and can be used in a variety of fishing situations you may encounter while on the water. Definitely a lure you want in your arsenal at all times.
To fish these on a cast is very similar to how you would fish an epoxy jig inshore.
“Cast it out, collect your line, keep your tip down, reel it really fast or really slow with a lot of rod twitching,” said Capt. Mike. “This is a good technique to buy a little time if you’re leading a fish.”

Example A or B on the above diagram is the best technique for this situation.
One of the best things about the Epoxy Jig is that although it’s 4oz and it’s mostly Epoxy so it’s light relative to its size. For example, and unlike top water plugs, you can cast at a school of breaking fish and let it sink down about 15 to 20-feet and then start working the bait.
A lot of times, schools of breaking fish will go down as the boat approaches but they’re likely still in the area. This is where the Epoxy Jig comes into play nicely. If you only had plugs, you’d miss your chance of hooking up but with the Epoxy Jig and that extra weight, you can get down below the surface and entice some milling or cruising fish.
“Now that I’ve let it sink maybe 15 to 20 seconds, I can start retrieving,” Capt. Mike said. “The lure will have a very natural flutter and it will look like a wounded bait fish under what would have been that top water feed.”
Before Mike could finish his spoken tutorial on the most effective way to retrieve the Epoxy Jig, tuna started breaking all around the boat. Instead of talking about what to do, he decided to show us.
With a single cast into the school, Mike began a medium/medium-fast retrieve and hooked up almost immediately.
“This looks like a good fish,” said Capt. Mike. “Sometimes you don’t get to finish your train of thought and that’s perfectly OK.” 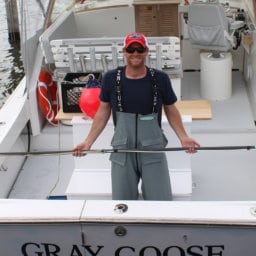 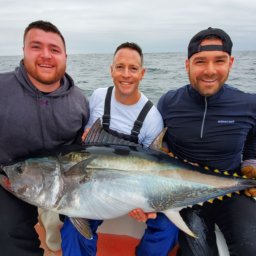