Gifted to Capt. Mike Hogan over 10 years ago by the late founder and president of Poon Harpoons, Kevin Glynn, this harpoon has lasted over a decade in the hands of experienced anglers and the bodies of big game fish like Bluefin tuna and swordfish.

Upon purchase, the kit includes the harpoon itself, a rigged thru-wire and spliced running line, the harpoon dart and a polyball, all which need to be assembled before use, which can be made simple via Capt. Mike’s detailed instructions.

“The base of the harpoon is two, 4-foot shafts, so it’s about 8-feet and there is a connector piece,” Capt. Mike said. “Then the head and the shank will make the overall length about 10-feet.”

The assembly itself should only take a few minutes.

Step One: Assemble the two, 4-foot shafts to make it one 8-foot section. You have two pieces and a connector piece. With the connector piece, slide it into one end and screw it in. Because the sides are interchangeable, it doesn’t matter which side it’s screwed in to. Now you will have you main part of the harpoon.

Step Three: Insert the shank into the head of the harpoon. It’s nicely threaded and there is a flat end on it to make it easier to screw it in with your fingers.

Step Four: Place the butt cap on the opposite end of the harpoon. This is important because it has a stainless steel marine-grade carabiner and this is what’s going to connect to the running line once it’s connected to the fish.

Now you have a rigged harpoon ready for the dart and the running line.

The standard-issue kit comes with a pre-rigged basket with everything you need. The buoy balls will need to be inflated but any standard pump you have at home will work well. They cost roughly $15.00 at your local department store if you don’t have one on hand already. The original poon kit comes with a wire-rigged dart, which is the traditional, standard issue, classic way. Although, some folks do prefer to tie their own dart. The running line comes pre-spliced at 200-feet and ready to thread on to the harpoon dart.

You are going to thread the spliced loop through the wire loop, which will be done with a loop to loop connection, which is a secure and easy way to connect these two parts.

Step Five: Place the harpoon dart (lily) on to the tip of the shank.

Step Six: To keep it running nice and secure, use electrical tape to keep the line running smoothly along the harpoon shaft. You want the tape to be secured snug and firm but not overly strong because you want the electrical tape to break away if you need it to. It should be connected in three places; the front, the middle and the end. This is designed to break off if you need it to.

Step Seven: Run the line through the carabiner so that when you throw the harpoon, it will be permanently attached to the running line.

Step Eight: Prepare your basket by making sure your running line is coiled loosely over itself so it can exit the basket very quickly without a tangle and also make sure your buoy ball is attached and ready to go.

“One little tip I would like to add when managing a 10-foot long pole in your cockpit,” Capt. Mike said. “I like to have some vertical rod holders for safe storage and I like to have the harpoon ready to go so you’re not worrying about setting it up when a fish is coming near the boat.”

“Because I am a righty, I am going to base the rod with my left hand and throw with my right hand,” Capt. Mike said.

Keep a finger or two on the butt end of the shaft, aim until you see color and finally, accommodate for light refraction. The fish is going to appear further up in the water column than it really is, so whatever you think your target might be, accommodate it by aiming down a little bit.

Finally, let your right hand control the throw and your left hand to make sure you are controlled, balanced and ready to go! 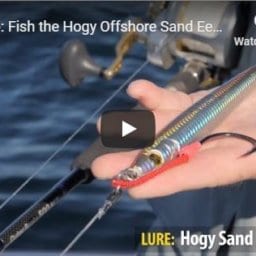