How To: Fishing Stellwagen Bank for Tuna #462

Stellwagen Bank marks the mouth of Cape Cod Bay and is the king pin of structure as far as tuna spots go. Stellwagen Bank is 65-feet at its shallowest point, about 200-feet at the edge. The bank itself is 6-miles across, making the edge an east line to cruise in a search pattern. There is almost always bait at Stellwagen with big currents and lots of depth changes to hold the foot chain. It’s rare to not see whales and life.

Stellwagen is a nice place to fight tuna, since it’s not as deep as some tuna spots can be, precluding a tuna to make deep dives and holds, which is difficult to endure by the angler in a defensive position. For this reason, Stellwagen’s shallow depth makes it a good place to be if you are o the lighter end of the spectrum with gear.

The four most notable sections of Stellwagen are: the Southwest Corner, the Southeast Corner, the Northwest Corner and Middle Bank but it’s hard to say which one fishes better at any time. If you are fishing “blind” (no reports in hand), it is wise to cruise the south side from East to West or vice versa with a few zigzags thrown in for good measure. Like all the tuna spots on the bay side, it is popular with trollers, live bait anglers and jig and pop crew. One caveat is that the dogfish have been notoriously thick in recent seasons so bring plenty of extra tails if you are fishing soft baits on a sand eel bite!

Haddock make a good Plan B if the fishing is slow. Look for lumpy bottom in deeper water. Any of your tuna jigs will suffice for haddock but the Hogy Sand Eel Jig in bubblegum is the most popular haddock lure. Slack tide is often the best time of day for a top water bite.

As for predicting the bank tides, check out the Race Point North Current to indicate the tides, show below using the Navionics Boating App.spo 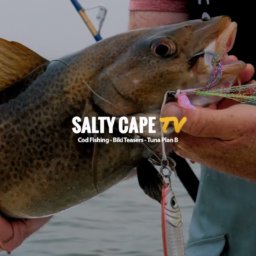 Offshore Jigging for Cod, Haddock and Pollock with the Hogy Jig-Biki Rigs Not every trip to the tuna grounds ends… ﻿ It’s officially 2022 here at Hogy HQ!!! We filmed this haddock video a couple weeks ago, and man did…