Anatomy of a Casual Albie Fishing Trip on Cape Cod

Captain Mike Hogan jumps aboard his buddy’s Boston Whaler Guardian for a little mid-day “hookie” fishing trip on Cape Cod targeting early September Albies. Capt. Mike breaks down the anatomy of a casual Albie Trip and how to avoid the stress of running and gunning in the “fleet” by using his favorite technique: “Walk and Gun.” Capt. Mike deep dives on methods of finding your own albies, tactically approaching schools, presenting casts, tying knots and which retrieve to use on what lures when.

Taking an “extended lunch break,” better known as hookie, Capt. Mike and his friend Jeff head out to Nantucket Sound on a last minute trip in search of the elusive False Albacore, a fall favorite on Cape Cod. With limited gear and not a lot of time, Capt. Mike turns to his albie playbook to target and catch these finicky fish.

Finding Your Own Fish

Step One: Locate a pod of bait and vortexing birds working the surface. Drift with the pod of bait and fire out a series of blind casts while waiting for the albies to show up.
Tip One: Cast upwind, this makes for better casting.
Tip Two: Keep your eye on the horizon for vertical bird action which is indicative of fish pushing bait to the surface.

Step Two: Walk and Gun technique. Slowly move from bait ball to bait ball while blind casting before targeting fish.
Tip One: If they go down, keep casting! Slow and low action.
Tip Two: Slow and easy catches more fish. Capt. Mike catches more fish playing it slow, reading and leading the schools and getting downwind from the fleet.

Tip One: Choose a single hook that is easy to release, making it easier to remove the hook from the mouth of the fish.
Tip Two: Have a range of lures on board to choose from.

Loop Knot: Going to give the lure more flexibility on the leader and more action. The lighter the jig, the more important the lure becomes, Capt. Mike said.  It’s an easy, simple knot you can’t mess up whether your adrenaline is high or you’re tying knots in the dark.

Step One: Start with a simple over hand loop in the leader about an inch past the tag end.
Step Two: Thread the tag end through the eye of the lure. Come out the hole, around the tree and back in the hole.
Step Three: Pull the knot tight and closed and you’ll notice the downward facing tag end, which is important to avoid catching weeds.
Step Four: Shorten the tag end.

Capt. Mike loves the versatility of theses jigs. They can be fished fast, slow or anywhere in between.

Skippy Retrieve: The fastest of all the retrieves. Causes the bait to skip across the surface, imitating a large fleeing baitfish.
How-To & Tips: Cast out and reel in fast, collecting slack while keeping the rod tip up to work the lure across the surface. Great in that it’s a lighter lure rather than a lead based jig. Its’ lightness allows for a skipping action. Works particularly well in calm water.
When To Use: When the fish are scattered and it’s a hard to get an albie to commit. Causing a commotion with the lure with entice the fish and draw attention to the lure. Best used in calm water.

Medium Retrieve: Despite its name, the medium retrieve for the Epoxy Jig is on the faster side of the spectrum but it is the most versatile retrieve of the three.
How-To & Tips: Cast out and retrieve with the rod in a horizontal position above the water. Impart some reel tip action while slowing down and speeding up your reel speed. Adding pauses to your technique can illicit a reaction strike.
When To Use: This retrieve is Capt. Mike’s bread and butter. He uses it 95% of the time because it can be altered between fast and slow speeds and it covers a lot of ground. It’s a great go-to technique.

Slow & Low Retrieve: This technique is best used when the hot and heavy action dissipates, but you think some feeding fish might still be in the area.
How-To & Tips: Cast out, collect the slack and let the lure sink. As you begin to real, twitch the rod tip and let the lure flutter down into the water column. This continuous pattern imitates a wounded baitfish that is trying to make its way out of the feeding chaos. Reel very slow and lazily.
When To Use: When the feed has just ended but you know there are still fish around. It’s a last ditch effort to replicate an injured baitfish in hopes of a enticing a lingering albie in the area. Woods Hole is one of the most treacherous patches of water on the East Coast. The tide really cranks… 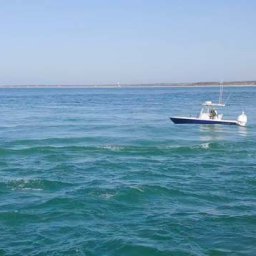 How To: Jigging Through Sand Eels for Striped Bass

Capt. Mike shares a few tips for when you’re marking large plumes of sand eels and striped bass, but can’t get them to notice your jigs. Capt. Mike Hogan and John Burns head to the Regal Sword in early August in search of a summertime cod bite after taking a quick look for bluefin tuna. This is quite possibly the most popular knot for connecting braid to mono for inshore striper, bluefish, albies and bones…. Capt. Mike Hogan and the Hogy Crew set out to Middleground in search of topwater stripers but before we can… The Salty Cape Crew head out in early June with Capt. Jamie Simmons of Buzzard’s Bay Outfitters to chase topwater…